My motivating idea for writing The Sugar Season was simply to understand the thoughts and feelings of a forester as he looked at the trees and woods. I live in New Hampshire because I love to hike in the mountains. When an invasive insect was discovered in Massachusetts, leading to the cutting of thousands of maple trees, I called Bruce Bascom, the largest maple syrup producer in New Hampshire and one of the largest processors in the United States. I subsequently spent many hours with Bruce, traveled with him, and sought out the people he recommended. The Sugar Season is the story of the 2012 maple sugaring season, and a man who knows more about the maple industry than just about anyone.

The Sugar Season was selected by The Boston Globe as one of the Best Books of 2014.

Grand prize winner for 2014 of the Green Book Festival award, honoring books that "contribute to greater understanding, respect for and positive action on the changing worldwide environment."

In Literary Journalism Studies John Hartsock describes the book as the "kind of narrative that celebrates the ordinary in life. In doing so, however, it uncovers the extraordinary."

A review from the Washington Independent Review of Books by Kristin Macomber: "Whynott sets his illuminating tale within the framework of one year, one harvest, and one family’s syrup business. From there, he chronicles the history, the technological advances, and the effects that climate change will surely have on this biosphere-sensitive product. He also introduces his readers to a fascinating array of individuals, all of whom depend upon the bounty of the sugar maples for their livelihood."

An interview with Tom Ashbrook on On Point, the National Public Radio program.

Getting down to some funny business on New Hampshire Public Radio's Word of Mouth: a taste test, blindfolded, and an interview with Virginia Prescott.

From the Boston Globe: "Whynott’s engaging book offers a skillful and fascinating peek behind the curtain of one of the region’s oldest and most beloved traditional industries." See the entire Boston Globe review.

From Saveur: "Thanks to The Sugar Season, a surprising new book by Douglas Whynott, that [previous] vision has now been supplanted by something far more complex, accurate--and interesting. It's a smart, engrossing read that gives this sweet crop--one of America's oldest agricultural products--its full due."

"Could the romantic attachment so many of us have to sugaring—not to mention the pragmatic recognition of the economic importance it has to this region—help spur movement toward addressing climate change?" The Valley Advocate

The Sugar Season selected as one of "This Weeks Must-Read Books" by the New York Post.

"The Sugar Season is part business case study and part John McPhee nonfiction adventure into the depths of a subject — as told by a host of driven, devoted and talented characters. Whynott’s comprehensive lay of the land includes climate change, the transformation of syrup production into a bankable industry, the interdependent community of syrup makers, the forests and their health, the process of making syrup and the complexity of the syrup itself. Playing a starring role in this steadily unfolding narrative is the highly quotable, ingenious, risk taker Bruce Bascom, whose farm in Acworth, N.H., becomes a top-tier syrup producer and distributor in 2012." --Rae Padilla Francour, Beverly Citizen

From Kirkus Reviews "Whynott takes readers behind the often closed doors of the syrup industry in both the United States and Canada. . .Thorough research provides fascinating insight into the sweet business of maple syrup."

From Publisher’s Weekly: "This inside look at the ups and downs of the maple syrup industry over its year-long harvesting and production cycle will be fascinating to anyone interested in the modern food industry, the effect of global warming on agriculture, and just how that sweet syrup got from a stand of sugar maples to the breakfast table. The last quarter of the book is both enlightening and alarming..." 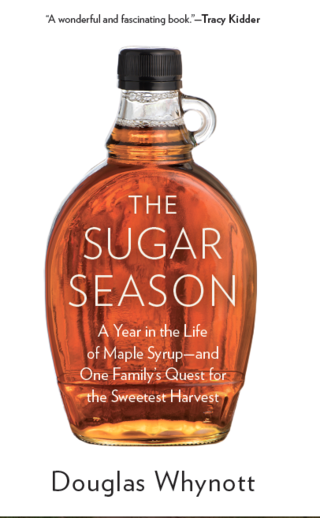 “Whynott has delivered the most complete and compelling account to date of the modern maple industry. His cast of vividly drawn characters and his descriptions of the challenges they overcome will make you feel like you’re right there beside them in the North Country’s sugarbushes. It’s one sweet read.” --Barry Estabrook, author of Tomatoland