A Unit of Water, A Unit of Time

A Unit of Water, A Unit of Time began when I received a letter out of the blue from an editor who had read Giant Bluefin and suggested I write about wooden boatbuilding in New England. I tacked the letter to my bulletin board and six months later made a tour up the coast of Maine looking for a boatyard. I found one owned by master boat designer and builder Joel White, son of writer E. B. White. Writing about the parallel nature of their careers seemed irresistible.

From a 2014 review by Joseph Houlihan, columnist for the Block Island Times
“Joel’s attitude about boat design is one of a humble man. 'Nothing in boat design is new under the sun. Everything is derivative.' White felt he’d never designed anything groundbreaking. What he is saying is that the designs of Nathanael and L. Francis Herreshoff are from which his designs were developed. He has a point. All great artists emulate their heroes. An artist takes all of the incoming information from the ether—whether it’s shapes or ideas— and assimilates it into his own creation. Here Whynott merges Joel White’s art with that of his dad’s. E. B. White said he wrote, 'To communicate a love of the world.' Whynott says, 'But how do you communicate the love of the world? Could one answer to that question, be that you should do what you enjoy the most? The lines of a boat, the lines of a writer.' Well played, Douglas Whynott. (This book belongs on your shelf for that one quote alone.)"

"White, whose simplicity and clarity of line reflected that of his father, E. B. White, is recalled in almost reverent terms, but the book is cheerful in its portraits of men engaged in a work that satisfies in its difficulty, elegant details, and infallibly stirring results."
–The New Yorker

"Boats, he writes are 'visible manifestations of the aspiring mind. They're like dreams, but you wonder, Who is it dreaming?' A Unit of Water, A Unit of Time commemorates Joel White's dream, not his death. Picking up the book, I had expected less of the former and more of the latter. Whynott confounded my expectations, and this was just one of the gifts he gently, generously bestowed on readers."
--The San Diego Union Tribune

"With unstated grace, the author evokes a sense of maritime community as well as a fierce devotion to boats and a love of the sea, which emerges as an almost mystical form of communion with nature and the cosmos. . . E. B. White would have approved of this quietly profound book."
--Publisher's Weekly

"Whynott examines Joel White, Brooklin and its boatbuilders with the same compelling gaze that Tracy Kidder and John McPhee turned toward those who build computers or study geology. Whynott's attention transcends his ostensible subject until it becomes a profound look at the human condition."
--The San Francisco Chronicle

"Whynott has a pretty refined eye and a tactile appreciation for the lines of a beautiful boat. He also has a keen eye for the well-turned phrase. . . Whynott's new book is a rich marriage between the unique talent of this writer and the intricacy of his subject."
--Maine Boats and Harbors

"White emerges from Whynott's delightful pages as an old soul as free-spirited and inspired as any character in his father's books."
--Kirkus Reviews

"A Unit of Water, A Unit of Time is as lovingly constructed as the boat it describes, and offers its readers the chance for a calm but vivid voyage."
--Bill McKibben 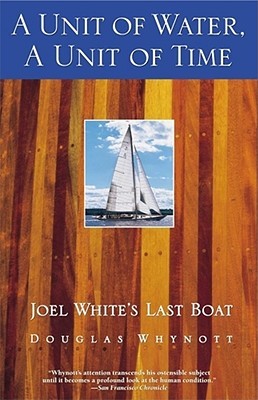 Whynott captures in loving detail the painstaking craftsmanship of the boatbuilders, and the reader comes to appreciate the deeper meaning of patiently creating functional objects of great beauty. Charming, colorful, and almost meditative in its appreciation for the virtues of hard work and the gifts of fathers to sons, A Unit of Water, A Unit of Timewill delight sailors and islanders alike."
--The Book Club, WOI Radio, Ames, Iowa.