Following the Bloom was my first book, begun when I was a graduate student working a summer job as a state bee inspector in Massachusetts, finished after many miles of travels chasing beekeepers.

In this absorbing work of literary journalism, Douglas Whynott introduces us to the world of migratory beekeeping, a world of clandestine state border crossings, dodgy rigs, and memorable characters. A classic account of twelve months spent chasing the nectar flow with a few good men and women–and millions of honeybees–Following the Bloom tells the story of America's "last real cowboys." Overcoming catastrophic mechanical breakdowns, escaped bees that wreak havoc in suburban neighborhoods, and unfriendly bee inspectors who threaten to burn entire colonies, these beekeepers truck hundreds of thousands of hives from state to state. From the cranberry bogs of Cape Cod and the blueberry fields of Maine to the clover fields of North Dakota and the orange groves of Florida, beekeeper and bee alike pursue the bloom.

Seamlessly combing the remarkable physics of the beehive, the political realities of commercial beekeeping, and the compelling adventures of America's migratory beekeepers, Following the Bloom pays homage to the hive, the honey, and the beekeeping cowboy.

"Like John McPhee writing on oranges, Whynott demonstrates that an accomplished and fervent author can tell readers more than they would have believed they wanted to know about a seemingly mundane subject. In this enthralling book, bees--with their evolutionary and social history, their place in everyone's life, their scholars--and the migratory beekeeping business--with its legends (e.g. Lorenzo Langstroth's discovery of bee space), its most unforgettable characters, and the tracheal mite that endangers it--are captured in a prose that, although factual, evokes transcendental contemplation and daydream."
--Booklist

"Ever been struck by a preposterous newspaper story that you glance at the top of the page to see if it's April 1st? I was three chapters into this book before I stopped checking the date, by which time nothing could have stopped me from reading."
--The Guardian

"The pages of Mr. Whynott's book are like honeycombs themselves, laden with anecdotes, crammed with color and detail."
--Washington Times

"In this engagingly offbeat study, Whynott explores the human side of beekeeping, traveling with the men and women who truck millions of hives from state to state, struggling with mechanical breakdowns, bears, bee diseases, parasitic mites, and increasing competition for choice sites."
--Los Angeles Times 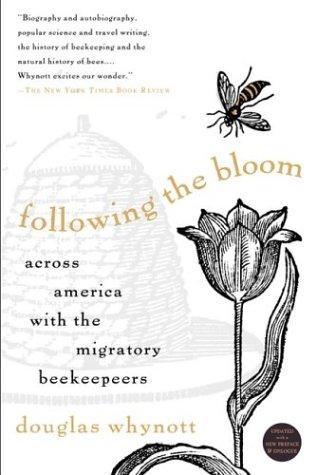 "...This is one of those rare books that illuminates an arcane and awkward subject, without ever forgetting to entertain in the process." --The Independent